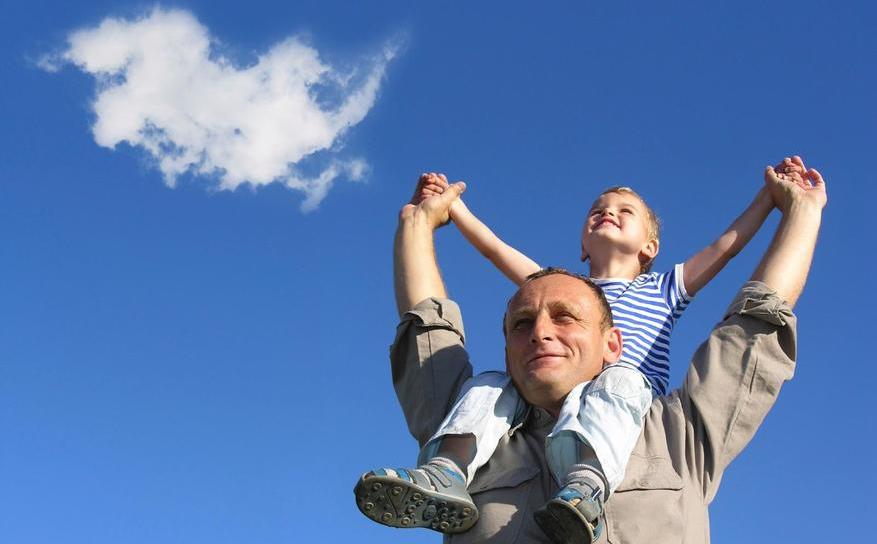 Dihydrogen – H2, or simply hydrogen, is a gas with “super-natural” properties: it is the most powerful gas, it contains no carbon, it does not pollute, it is lighter than air and it is odourless. It can be used to facilitate electricity production and energy storage. When used, the only bi-product emitted is harmless water vapour.

Hydrogen: a thousand and one uses

Hydrogen can be used:

Advantages of the hydrogen economy

The ‘hydrogen economy’ is the name given to a large number of diverse applications of hydrogen as an energy vector.

Hydrogen is what is known as an ‘energy vector’. This means that, before it can produce electricity, it must first be separated out from other molecules, such as water (H20) or methane (CH4) – a process that requires energy. No matter what the source of the hydrogen, its use leads only to emissions of water vapour. Its utilization leads to no greenhouse gas emissions, no emissions of particulate matter, nor any other form of pollution. 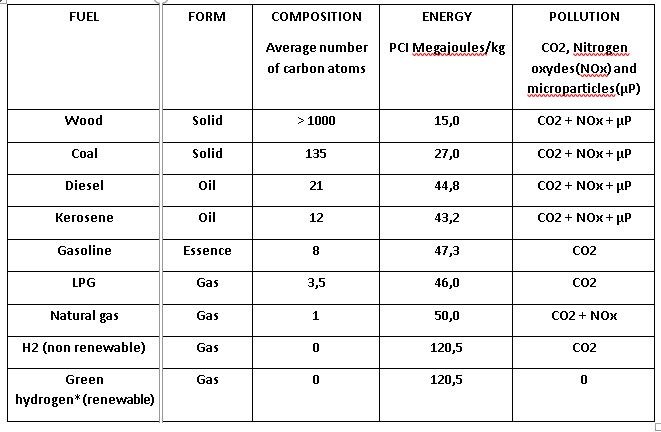 Hydrogen, as an energy vector, is clearly the best alternative to fossil fuels for both ecological and economic reasons. ‘Green’ hydrogen is hydrogen produced through the electrolysis of water molecules (H20) into H2 and O2 using electricity that is generated entirely from renewable sources (i.e. wind energy, solar energy, tidal energy..etc). The resulting H2 can be used at a later time to produce electricity = and the only bi-product is water vapour – hence the use of polluting and climate changing fossil fuels is replaced by a renewable cycle from water back to water.

For example, hydrogen cars are cars powered by a ‘fuel cell’ which produces electricity in the car by combining the injected hydrogen with oxygen from air. Moreover, and the icing on the cake, given hydrogen’s high efficiency (a car uses only about 1kg of H2 to travel 100km, or 100 km per kg), hydrogen can also improve a car’s power, it can increase its autonomy and it can speed up the recharge rate (compared to batteries). The car’s hydrogen ‘tank’ can be re-filled from empty in less than 3 minutes. 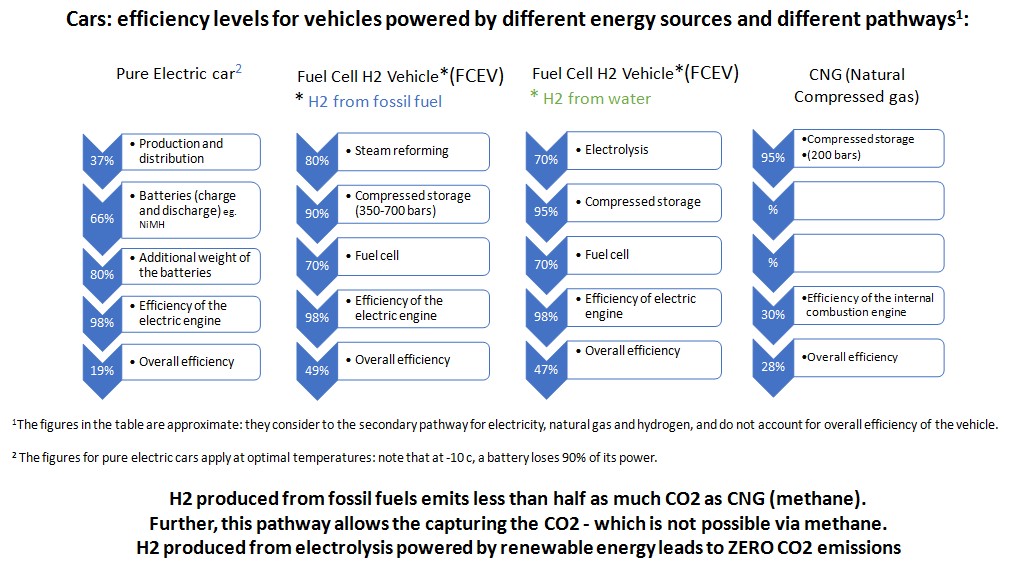 Hydrogen means no wastage of solar and wind energy

Ideally renewable energies contribute greatly to the overall energy mix (fossil fuels, nuclear energy, renewable energy, etc. However, solar and wind energy cannot be produced ‘on demand’, hence they are often available when not needed, and vice-versa, leading to wastage, shortages and saturation of the grid during over energy production periods.

As electricity can’t be stored, this energy is wasted.

To avoid wastage, the excess electricity produced by windmills and solar panels can be used to produce hydrogen which can be stored and used to power Fuel Cell Hydrogen Electric Vehicles (FCEV) or to heat buildings. When technology will be less expensive, the stored hydrogen can be reconverted into electricity with the help of a fuel cell. This provides an ‘energy buffer’ and produces no pollution.

Hydrogen can be produced and used on the spot, and so each producer/user has a choice as to whether to connect to the grid or not. Production and utilization can happen without a grid. This represents a paradigm shift in the energy sector – a shift from a centralized production, management and storage model to an individualized production and consumption systems.

Wherever it is created, building the hydrogen economy will generate a significant amount of employment for technicians, entrepreneurs, researchers, engineers, etc.

Hydrogen can be produced from all renewable energy sources, or from other energy sources, and the energy stored. This can reduce or even eliminate the need to import energy. Likewise, there is no longer a need to be connected to the electricity grid.

Difficulties in creating the hydrogen economy?

The cost of producing any new technology depends on the initial scale of production.

Hydrogen is lighter than air - unlike town gas, LPG, CO, CO2 etc – and does not accumulate. It rises and disperses.

Notably, hydrogen powered cars are considered sufficiently safe to be allowed to be parked in underground car parks – unlike LPG cars.

Currently, the small number of hydrogen pumps discourages most people from buying an hydrogen powered car.

Like all new things, the truth about the hydrogen economy – both the advantages and the inconveniences – needs to be widely communicated and the awareness of the public raised.

As a new technology, it requires new regulations or the modification of existing regulations.