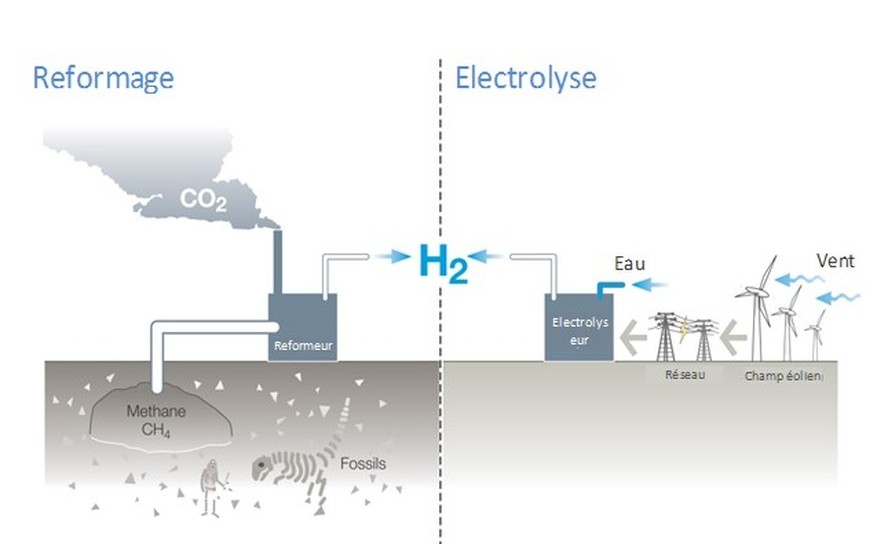 Each year, globally over 60 million tonnes of hydrogen are used in diverse ways: chemical reactions, transport, hydrogen stations, heating (source: Afhypac). This is the equivalent of 1/4 of global methane production – noting that the most common means of producing hydrogen is from methane.

One kg of hydrogen provides sufficient electricity to run the average Belgian household for three days.

Hydrogen is best considered as an energy ‘vector’. That is, before hydrogen can be used to provide electricity, the hydrogen must first be dissociated from the molecules in which it is found – typically in water (H2O), in organic molecules found in compost, in natural gas, oil or in alga. No matter what the production process, the use of hydrogen leads only to water as a bi-product.

The most common industrial process to produce hydrogen is the steam reforming of natural gas. The main component of natural gas is methane (CH4). At high temperatures (between 700 and 1100°C), water vapour reacts with methane to produce carbon monoxide and hydrogen. This mixture of hydrogen and carbon monoxide is commonly referred to as ‘synthetic gas’. If the process is undertaken in the presence of excess water vapour, the carbon monoxide is further oxidized to yield carbon dioxide, which also leads to additional hydrogen production. The hydrogen is then purified under high pressures (20 Atmospheres). In this process, for each kg of hydrogen produced, 10kg of CO2 are emitted.

2. Electrolysis of water with platinum

The alternative approach to produce hydrogen, which is carbon neutral (i.e. leads to no carbon emissions) is through the electrolysis of water. This is the decomposition of water, using an electric current, into oxygen and hydrogen molecules. The electrolytic cell consists of two electrodes – usually inert metals such as platinum – immerged in water and connected to a continuous source of electricity.

3. Electrolysis of water with enzymes

Electrolysis is a method of producing hydrogen from water with the help of electric current. The electrolytic cell consists of two electrodes – usually inert metals such as platinum, a precious and expensive metal and which is responsible for the high production cost of electrolysers. “Using enzymes to replace platinum is a cost effective alternative to reduce costs and improve profits in the production of hydrogen form water”, assures Dr. Philippe Lorge – president of H2life foundation and director of development project of enzymatic electrolyser and fuel cell. Enzymes are catalytic proteins naturally present in vegetables and animals and can also be synthesized industrially.
For this project, Dr. Lorge got inspired by the natural process of photosynthesis – more precisely the first stage of photosynthesis. This consists of using solar energy and the photosynthetic enzymes to dissociate the elements (H and O) in the water. This method – termed enzymolysis or enzymatic electrolysis– is a renewable and a cyclical biological processes - the elements in the water are dissociated and then re-associated whilst the energy is produced.